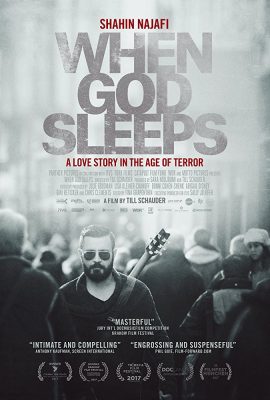 VCFA Film Faculty Till Schauder’s WHEN GOD SLEEPS is screening this week, November 16th-24th, at the International Documentary Film Festival Amsterdam. IDFA is one of the biggest documentary film festivals out there, congrats Till! We were lucky enough to get to screen this film at our residency this past October.

To learn more about the festival line up visit IDFA.

After he addressed an imam in a song—which was taken as an insult—a fatwa was issued against the Iranian musician, poet, singer and activist Shahin Najafi in 2012. Calling for his death, the fatwa offered a $100,000 reward. He travels from Turkey to Germany and settles in Cologne, where he now lives in fear: “sleeping with one eye open and with a knife under the pillow.” Although Najafi is in constant danger, he continues to try to play music, even after most of his band members have quit—they’re just too scared to play. When he adds fuel to the fire by releasing a new song about male domination in the Islamic world, the fatwa is issued again—now with a $500,000 reward. Will he put his audience in danger if he goes on tour? Perhaps inevitably, this portrait of the “Salman Rushdie of rap” also covers issues such as terrorism, religion, repression, artistic protest and the refugee crisis.

Past WHEN GOD SLEEPS news and reviews: