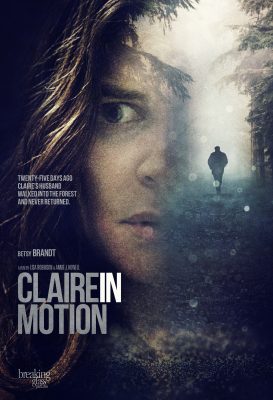 Annie Howell’s 2016 film CLAIRE IN MOTION, co-written and co-directed with Lisa Robinson and starring Betsy Brandt (of Breaking Bad), is currently available to stream on Showtime. The film premiered at SXSW. Annie Howell is a faculty member of the VCFA MFA in film program.

CLAIRE IN MOTION is the second feature film from filmmaking team Lisa Robinson and Annie J. Howell. Exploring a short period of time inside one woman’s life-altering crisis, the story begins three weeks after math professor Claire Hunger’s husband has mysteriously disappeared, the police have ended their investigation and her son is beginning to grieve. The only person who hasn’t given up is Claire. Soon she discovers his troubling secrets, including an alluring yet manipulative graduate student with whom he had formed a close bond. As she digs deeper, Claire begins to lose her grip on how well she truly knew her husband and questions her own identity in the process. Claire in Motion twists the missing person thriller into an emotional take on uncertainty and loss.

Lisa Robinson and Annie J. Howell have crafted a transfixing, thoughtful thriller — where the directors’ deft maneuvering around the intimate performance of Betsy Brandt keeps you glued to the screen.
— Oakley Anderson-Moore, No Film School

What can one say about a film as perfect as Claire in Motion? With a script that subtly explores the realm of emotional conflict, and powerful performances from its ensemble of actors, the movie is a gentle tour-de-force about trauma and healing …. One emerges after its brief 80 minutes as if from an intense, cathartic dream, haunted and challenged by its raw truths, perhaps, but made all the stronger for them.
— Christopher Llewellyn Reed, Hammer to Nail

Howell also wrote the screenplay for LITTLE BOXES (2016), starring the late Nelsan Ellis and Melanie Lynskey. LITTLE BOXES can be viewed world-wide on Netflix. The film premiered at Tribeca and was the largest sale out of the festival in 2016.

The Voyeur, Revealed: An Interview with co-directors Josh Kuory and Myles Kane,...