VCFA MFA in Film alumnx Paula Allen (‘16) recently completed a new animated short film, BEEHOLD. BEEHOLD tells the story of what the future will be like for bees and was created with over 200 children’s drawings and animations. Children who participated in the project  hailed from Florida, New York, and Pennsylvania. Paula enlisted Bradley Turner (’17), an alumnx from VCFA’s Music Composition Program, to compose and score the film to exciting results.

Check out the trailer, as well as a fun interview we recently had with Paula and Bradley about the film and their collaboration, below:

Tell us a little bit more about how this idea came to fruition and your collaboration with your students?

Paula Allen: Most of the drawings for the film came from elementary-aged children (kindergarten, grade 1, and grade 5), with a few students in high school creating a few drawings. In terms of the animation piece, my online students, who are middle school-aged helped with the broad themes/ideas, scenes, animation, backgrounds, and more. BEEHOLD  has been a real “kid created” film, I was just a guide for them really.

What is the final running length of BEEHOLD the film?

PA: The film is 8 minutes long. I wanted to keep it to 5 minutes, but there was just so much art and so much going on, I didn’t want to cut too much!

For the score you brought in another VCFA alumnx, Bradley Turner from the Music Composition Program. Tell us a little more about that collaboration.

PA: Bradley understood the project right from the start. Even before the story was completely fleshed out, I knew he was going to give us what we needed and I trusted his choices. Scenes were enhanced and overall more successful because of the sounds and music composition, even just small choices, like waiting a few beats to emphasize on a certain movement, made a big difference. In one scene, for example, we have an army of pesticide bottles that are marching–Bradley did an amazing job emphasizing that movement with sound.

Bradley, can you talk about your collaboration with Paula? Did she give you an initial sense of what she was looking for in terms of the music, or did you jump right in with your own ideas?

Bradley Turner: When I saw Paula’s call for a composer, the description of the film and what she needed musically sounded similar to Don DiNicola’s animated short film SPACE GERM for which I did the music and sound design last year. I sent her a link to SPACE GERM and also told her about a couple of other VCFA alumnx with whom I had worked (Justin Scotarczyk and Martin Castaneda). Paula sent me a rough storyboard/outline she had created that gave me a broad sense of the story with a few mentions of where there would need to be musical cues. This gave me a good idea of what I would be creating long before the film had been animated.

The film has no narration. What elements helped you determine the direction(s) you would take with music and sound?

BT: Paula’s storyboard as well as the use of text in the film helped provide narrative direction. The overall idea of a bee moving from a peaceful sanctuary in nature to a dystopian future and eventually finding some form of that safety again, felt full of musical possibility.

Bradley, you’ve worked with a few students and alumnx from the MFA in Film now. Does anything about your shared VCFA experiences lend itself to successful collaboration?

BT:  Everything about my experience at VCFA set me up to be an effective collaborator. The constant flow of ideas between students and faculty had an enormous impact on how I work. My study every semester was ultimately a collaboration between me and my faculty advisor, as well as the various faculty members I’d consult with along the way. That experience allowed me to not only be comfortable getting and giving feedback, but to rely on that give and take in my creative process.

PA: Bradley and I are working together on my next animated film which will be about sea turtles and plastic pollution in the oceans. We just “get” each other, and I am lucky to have him on board! 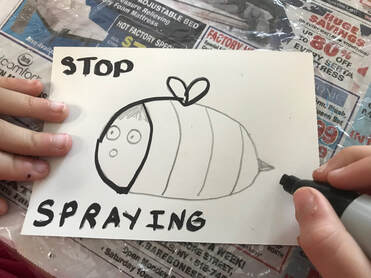 Instilling a love of art, activism, and meaning-making in young people is so important. What are you most proud of in terms of this project and the awareness it brings to important environmental issues?

PA: Well, first, children by the hundreds went home and taught parents not to buy Neonic poison flowers at stores, they asked parents to plant more native plants in the yard, and they asked neighbors not to spray their lawns. I had a parent take $100 worth of plants back to the store because they were labeled as treated with Neonic chemicals, so that is something!

BT: The film’s environmental message immediately made me want to be involved. Furthermore, the fact that this project was animated by school children added so many layers of purpose to the film. As a composer, I feel like a large portion of what I do is rather self-serving. I spend days creating things, unsolicited, simply because I feel they’re important. Getting to work on a film that has undeniable purpose is such a lovely opportunity.

PA: BEEHOLD started as an idea that flourished far beyond what I ever expected. I am extremely proud of everyone who did a drawing, who painted a flower, who animated a scene, and who even just chose to not pull a weed (dandelions are good for bees afterall!). BEEHOLD’s message is told atypically, we go forward in time, we see how much damage can be done, we heal the problems. That is the biggest message: To not destroy nature, to protect it, to keep it safe–all of it, not just the bees.

So great, thanks for taking the time!  BEEHOLD premiered in December 2019 and has been screened at various schools. The film has also recently been submitted to several film festivals, so more news on that front soon. Additional press on the film can be found here.

You can find out more about Paula at www.pollyzoom.com. To learn more about Bradley and his work pop on over to his website.best shoes | Jordan Ανδρικά • Summer SALE έως -50%