Current VCFA MFA in Film faculty member, Annie Howell, along with her co-writer and co-director Lisa Robinson, discuss their film CLAIRE IN MOTION (now available to stream on Showtime), their co-writing process, character development, and how film can be vehicle for change.

Aja Zoecklein: How did you first meet and when did you begin your collaborative teamwork?

Lisa Robinson: We met at NYU grad school, but didn’t actually make any films together there. After we finished school we had both written our own features and were trying to get them made but financing was taking a while…we had a conversation about an idea and decided we should make a web series together. It was called SPARKS and was eventually syndicated by the Sundance Channel, which was great. We had fun with it. We would each write an episode and kind of piggyback off each other. From there, it kind of naturally evolved into making a feature, SMALL, BEAUTIFUL MOVING PARTS, which was partly based off the series.

Annie Howell: When we made CLAIRE IN MOTION, I was living in Athens, Ohio and teaching film full time at Ohio University. As soon as I landed I was like “oh, this could be a really interesting place to make a film.” Lisa visited, and I would send her pictures, and that was one of the jumping off points, just thinking about this interesting town that is not as often seen on screen.

AZ: What is your writing process like? How do you structure your writing as collaborators—together in a room, separate, both?

AH: We typically write independently, swapping and sharing ideas. For the two features, for example, we would have this really long running text/blast email conversation that never stopped! (laughs) Which is great because it’s what the writer’s brain does anyway, but you are just sending it off to another person. We both like having our assignments, agreeing on what that is, and then coming back together with the results. We had a couple of times when we would sit in front a whiteboard together to figure out whatever challenge was in front of us.

AZ: Do you write differently knowing that you will be directing the work?

LR: I don’t think we write differently because we’re directing. The script has to communicate to not just us, but to our actors and to the rest of the crew. It needs to be just as transparent in terms of what we’re trying to do as it would be otherwise. The prep is actually the really important part—where the writing is changing—because you are starting to manifest the stuff, physically: you’re picking locations, costumes, actors… It’s such a crucial part of the translation; it’s at that moment the writing gets pulled into the directing space.

AH: I agree, the writing doesn’t defer—writing is writing. We probably have our producer’s hat on a bit: Is this possible? Can we write for a location that we already have? But, consistently, the writing has to work first.

AZ: The characters in CLAIRE IN MOTION are so well-fleshed out. I never felt like anyone was behaving inauthentically or outside of their spectrum of responses. As writers you get the fun task of people-ing your world, how do you go about writing your supporting characters?

AH: For this film, again, it was really informed by this particular town, and also our shared knowledge of the world of academia—a lot of that world is the personal and the professional mixed together—and so we brought those instincts, impressions, and experiences to the table. Often it’s so challenging and difficult to understand your protagonist and to keep searching for that thread or theme. Supporting characters can often come much quicker, which helps to build that confidence in the writing. In this case the place that she is in and the people around her are just such an important part of the story…

LR: Since Annie was teaching and living there she had a lot of interesting encounters and specifics to bring to it. Since I was further away, I brought a more abstract mental state to it, more along the lines of, what is Claire going through and what kinds of characters would trigger her or bring out parts of her psyche? Those two things combined helped create some of these character. 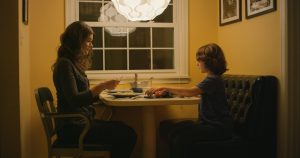 AZ: While part mystery/thriller, CLAIRE IN MOTION really tells the story of a woman who is faced with the reality that, in truth, you never can know somebody entirely, and that, perhaps even more importantly, that lack of recognition extends to yourself as well. What prompted you to explore this subject matter in the way you did? Did you know going in that you wanted Claire’s evolution to start at x and end at y?

LR: We knew we wanted her to go through a tragedy and have to grapple with that uncertainty, and letting the viewer grapple with it as well. We weren’t quite sure how we were going to do it, or even what the tragedy was going to be,  but we were interested to see how that uncertainty shifted her identity. We set out to explore a character in a place in her life where she is comfortable—she’s a little bit older, not in her 20s anymore, has a sense of who she is and what her life is going to be—and we wanted to upset that, let that run out, and see how she shifts and changes.

AH: We also had some time in the writing process to really chew on a number of different scenarios—we played quite a bit with it in terms of plot, running a lot of what-ifs. We have a strong shared value that we want our audience to have their own experience, so we weren’t going to wrap everything up neatly. The persistent interest in theme being: the not knowing of life and how that can surprise you; what you learn from it and how you might be damaged by it; and inevitably, how you have to just keep going.

AZ: In light of the current state of the world, how do you see filmmaking as an art form shaping and/or informing us as humans?

LR: There’s a lot of exciting films out there right now. GET OUT is a really amazing example of a film that is surprising and exciting in terms of genre, subtext, and choices…So, I’m still really excited about stuff I’m seeing every year. Film is such a powerful medium because it hits people on multiple levels at once. Unfortunately, that means film is related to propaganda, to Facebook, and to all this discussion about fake news. It is just such a powerful force that spreads out in all these different mediums, but, I still think it’s a great tool for change. We see films like MOONLIGHT or LADY BIRD, these are very particular voices that are getting widespread attention. It’s so great.

AH: A well-crafted visual story provides this opportunity for identification, empathy, complication of stereotypes, and personal introspection that’s unlike or dissimilar from the other other ways in which those things happen—which is, through actual physical relationships with other human beings. When you have the ability to silently interact with others—by that I mean, the characters—it’s a totally different process of growth. These stories are important for any person who is interested in evolving, and I am glad we can do that in different types of ways—through literature, through cinema, through just observing and watching.

AZ: Thank you Annie and Lisa!

Annie J. Howell is an award-winning screenwriter and director. Howell’s first film, co-written and co-directed with Lisa Robinson, was SMALL, BEAUTIFULLY MOVING PARTS, followed by the duos second feature, CLAIRE IN MOTION. In 2016, LITTLE BOXES, a film written by Howell and directed by Rob Meyer premiered at the Tribeca Film Festival, where it sold to Netflix. The script for LITTLE BOXES is the recipient of an IFP Emerging Narrative Award for Best Feature and a San Francisco Film Society/Kenneth Rainin Foundation grant. Howell’s other credits include a short for the vanguard ITVS series FUTURESTATES, as well as the web series SPARKS, also created with Robinson and licensed to the Sundance Channel.She teaches in the MFA in Film program at Vermont College of Fine Arts, as well as City College, and has also been a member of the faculty at Duke University’s Center for Documentary Studies, Ohio University’s MFA in Film, and at The New School, where she was the Founding Director of the Graduate Certificate in Documentary Media Studies Program.

Lisa Robinson is an award-winning screenwriter and director. Her credits include the feature films CLAIRE IN MOTION and SMALL, BEAUTIFULLY MOVING PARTS, both written and directed with Annie Howell. Robinson has directed several episodes of television, including the Emmy award-winning A CRIME TO REMEMBER and the series FUTURESTATES, that had its series premiere at the Tribeca Film Festival. Robinson has written and directed several award-winning short films. She also works as a screenwriter and wrote MIND BLAST, an IMAX film for the Blue Man Group. She is the recipient of the Martin E. Segal Prize, the Mitsubishi Digital Media Lab Award for Excellence, and a New York Foundation for the Arts Fellowship. Robinson is currently  Associate Professor of Film at LIU. www.lisarobinsonfilm.com